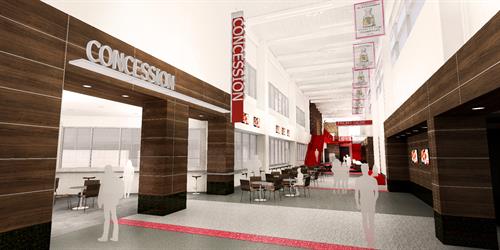 On July 29, 2015, the Chicago Blackhawks announced the organization would build a 125,000-square foot community training center for youth hockey development programs, recreational leagues, and other events, which would also serve as the practice facility for the Blackhawks and visiting National Hockey League teams. The state of the art facility is located two blocks south of the United Center at 1801 W. Jackson Blvd, Chicago, IL 60612.

Fifth Third Arena opened on November 21st, 2017 with a focus on making sure the Blackhawks have their needs met though features such as equipment storage space, training rooms, a player's lounge, a massive weight room, exhaust systems behind the locker room to dry off uniforms and equipment faster and cut down the odor, and a skills studio room where they can perfect their shooting, passing, and stickhandling. Additionally, there is also a major focus on the community aspect of the facility. Roughly 95% of the intended use of the new Ice Rink will be community based. This facility will provide $3 million of community benefits over five years.  Click Here to learn more about Fifth Third Arena Community Initiatives.

The full list of amenities in the facility include:

Get more information about renting space at Fifth Third Arena.